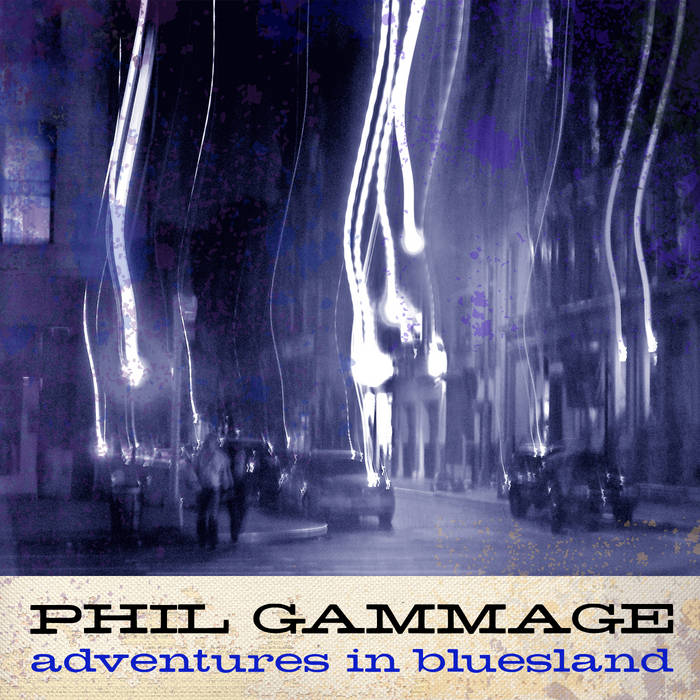 Thirteen songs divided between Phil's originals and his timeless renditions of classics from the American folk and blues songbook. The result is an extremely satisfying listen.

Best Albums Of 2014 #12:
"Gammage's voice? A gorgeous Isaak blues and rockabilly thing, the tempo putting the laid into laid back, and the playing a concise evocation of punk discipline (not sound) and Chicago blues (not Southern) momentum."
Rock NYC Live and Recorded

“Gammage has delivered an album that is an infectious, perfectly paced and varied exploration of the most American of musical forms. It captures a band that sounds like they’ve been playing in smoke-filled basement joints since the age of the Beats.”
Bucketful of Brains (U.K.)

“…a great/pleasant surprise. Adventures In Bluesland is not so much an adventure but a pleasurable listening trip.”
Popdose

“I am discussing Phil Gammage’s sweeping modern blues and rock album, which owes so much to everyone one from Presley to Leadbelly but sound not quite like any of them ….it is really about Phil’s wonderful singing; the man seems to have stepped out of 1957 and yet not. He is a one man million dollar quartet and this is an adventure not to be missed.”
Rock NYC Live and Recorded

“…for people who’ve spent some time with the blues (hell, that’s pretty much everybody, right?), it’s a reminder why we like the music.“
New York Music Daily

NYC based singer-songwriter and sometimes guitar slinger whose new album is "It's All Real Good".

“He has the brooding intensity of a Johnny Cash circa Rick Rubin added to post-punk circa 1980 smarts.
~ Rock NYC Live & Recorded ... more

Track Name: Ain't That Something
I thought I new what love was about
Then I met you and I found out
Now I’m left with nothing
Ain’t that something

I thought that I was the only one
But there was someone else and your heart he’s won
Now I’m left with nothing
Ain’t that something
Track Name: Kills Me When You're Gone
My dream ends in the morning when I rise
Sunlight shining blinds me in my eyes
I can’t wait to roll back into bed
Try to forget everything you said

Now everyday I take a step outside my door
Gaze at this city, I loved once before
A nightmare world that I’ve learned for sure
Without you with me it’s hard to endure

Laugh to myself, inside me I’m dying
A big joke cause I know that I’m lying
You stood there screaming, I didn’t hear a thing
Now I know what desperation brings
Track Name: Hanging On To You
I’m a four-time loser
I paid a heavy price
Lost all of my fortune
To liquor and vice
I needed someone to save me
After all that I’ve been through
I’m glad, yes I’m glad
That I’m hanging on to you

I did my time in the big house
The judge put me away
Then on the street hustling
And living day to day
Somehow I found you
Your help pulled me through
I’m glad, yes I’m glad
That I’m hanging on to you

When all hope is gone
And it’s time to sign out
Just remember my words friend
There’s no easy way out
Oh we all need someone
Who love can pull us through
I’m glad, yes I’m glad
That I’m hanging on to you
Track Name: See How We Roll
We came up to a signpost
A light far down the road
Before us begged salvation
If we’d only sell our souls
Come on let’s roll, see how we roll
Come on let’s roll, see how we roll

That line between good and evil
So very hard to see
A mistake here, a slip up there
And we’d end up casualties

When the time is ready
We’ll take a walk on down that path
Temptation on our shoulders
But we’ll have the very last laugh
Track Name: Big Daddy Reefer
Big Daddy Reefer passing through town
All you hepcats gotta come on down